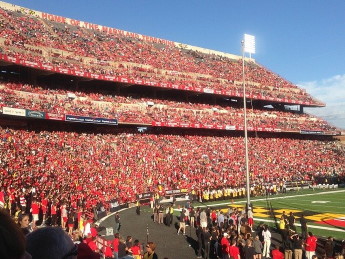 Gameday at home on the couch is fun and has its perks. Our favorite thing in the world is to attend live college football games. We prefer to be thrown into the mix with all 5 senses head-on and we hope you do too. The game is only a fraction of the experience and we can’t think of a better way to spend our weekend off. We’ve got room for you too. Just make sure you have your tickets in hand.

Here are just some of the things we love about being there in person.

Come prepaid. The tailgating ritual is one that’s taken seriously around here. Half of the fun of college football takes place before the game even starts, which is one of the reasons why we like to be there up close and in person.

Check out our complete guide to tailgating like a champ.

It’s good to see people taking pride in something, which is what you’ll see everywhere you look at college football games. The colors of clothing and face paint will let you know exactly where you’re at in case you forgot.

Some think that the organized cheers of fans are lame. We feel bad for people like that because we happen to love them. Let your guard down and join in with cheering and other school tradition. It’s good for morale. We promise that nobody is going to judge you.

Get ready to stand up. The wave is coming your way.

It’s in the air, it’s heavy and you can feel it. When the home team takes the field and all fans are on their feet. Or when it’s 4th and goal with only seconds on the clock and your team is on the verge of taking the lead. There’s not much to do but bite your nails and pray.

This rollercoaster of emotion will likely be going on until the game reaches its end. When it pops in either victory or defeat and the feelings met with this release are of bliss or sorrow. For your sake, we’re hoping it’s the prior because we know what a sweet feeling that is.

The live football college game experience is one big awesome social event. If you’re open to it that is. What better place to meet people, the like-minded folks all having a blast

Take a bunch of pictures with your new buddies. If you’re a regular at games, chances are you’ll be seeing a lot of them.

An often underappreciated aspect of live college football games is the marching band. We love the ambiance created by the horns blasting and drums smacking. Many people don’t pay them much mind. But I can guarantee if they didn’t show up one day everyone would feel like something wasn’t right, that something was missing – possibly a piece of all our hearts.

Exiting the stadium and walking back out to your car after your team takes it, and the fans rejoicing can only be described as a high. A high original to only college football games.

Having A Great Story To Tell Come Monday

You’re sure to be the object of envy of your coworkers or classmates come Monday. Nobody wants to be the one who shows up to work without a great weekend story… again.

There’s more than enough excitement to be found at live college football games to weave into attention-grabbing tales. And chances are if your peers are like you, they were watching the game from home wishing they were there. Wishing they were as lucky as you.

Words can only do this so much justice.