Every year from December 17th to January 9th, the top NCAA Division 1 college football teams square up for post-season bowl games across the United States, peaking on New Years Day (or the most important day of college football) when 6 notable bowl games are played – 2 of which are very crucial and determine which teams will see each other at the CFB Championship come mid-January.

What Are Bowl Games? 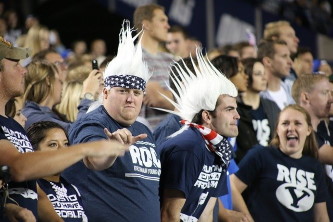 Bowl games are post-season paired matches to varying degrees of importance. Some bowl games are for the sake of football, while other bowl games act as the playoffs for the NCAA college football championship.

Unlike other sports –  college, professional, or otherwise – games don’t end post-season for those not involved in the playoffs. This has become even truer in recent times, when from 1990 to 2019 we’ve seen a 22 game increase in bowl games. This is compared to its early days of only 5 bowl games.

But we aren’t complaining here. We’re of the school of the more football the better, even if breaks tradition a bit.

Besides, we all know the games of importance to keep an eye out for – NY6.

New Years Day is exciting for many reasons. But none so much as the top-tier college football matches that take place.

If we’re lucky we get to sleep in a bit, reflect on the blast we had the night before while looking forward in anticipation of the New Year and all of the greats things ahead. An added benefit on New Year’s Day is the fact that everything is closed and we’re not expected to do anything but chill-out.

And if you’re a football fan New Year’s Day, and the days preceding it, give you even more reason to be happy with life — 6 top-tier Bowl Game. Every year on and around New Year’s, the most prestigious Bowl Games take place, termed appropriately the New Year’s Six, also known as the NY6.

The History Of Bowl Games

The history of bowl games is traced back to the famous and beloved Rose Bowl in Pasadena, California.

In 1902, pre-Rose Bowl, Michigan met Stanford for a 49-0 blowout in Pasadena at the Tournament East-West. This game took place before the Rose Bowl had been constructed but was sponsored by the Tournament of Rose Association.

By 1916 the proto-type for the annual Bowl Game was laid out when the Association sponsored yearly matches. In 1923 the Rose Bowl Stadium was erected.

By the year 1940, there were 5 yearly bowl matches and the number would increase with the decades to come. None so drastically than from 1990 on.

If you’re wondering why are college football games called bowls, it’s termed after the Rose Bowl, which is a bowl-shaped stadium. In the present day, bowl games occur in stadiums of all shapes and sizes. Some indoors and some outdoors.

What Teams Get To Play At Bowl Games?

Bowl games were once reserved for the best teams in the nation during the season and the most important bowls still are. The NCAA looks at what it calls “bowl eligibility” and they define it as “one that has won a number of games against Football Bowl Subdivision (FBS) opponents that is equal or greater than the number of its overall losses. Ties or Forfeited games do not count in determining won-lost record”.

According to NCAA’s standards for bowl eligibility, you would assume that your record had to be pristine to make it. Not necessarily. With the recent abundance of bowl games, we are now seeing teams with only a handful of seasonal wins show up for game day.

What is also taken into account is the Academic Progress Rate, or APR, for the lower-tier teams to figure who will play at bowl games of lesser importance. This is judged by the athlete’s success off the field and in the classroom.